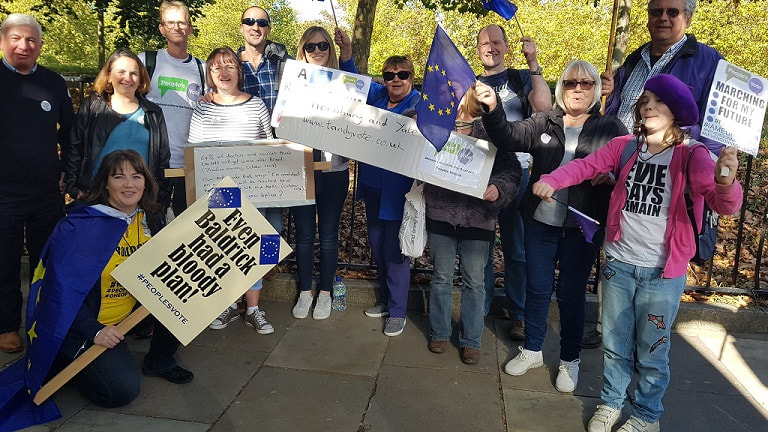 Thornbury and Yate residents at People's Vote march in London on 20 October 2018
​Our group hired a coach to join the People’s Vote March for the Future on 20 October 2018.  An estimated 700,000 people took part, making it the biggest political demonstration in the UK since 2003! 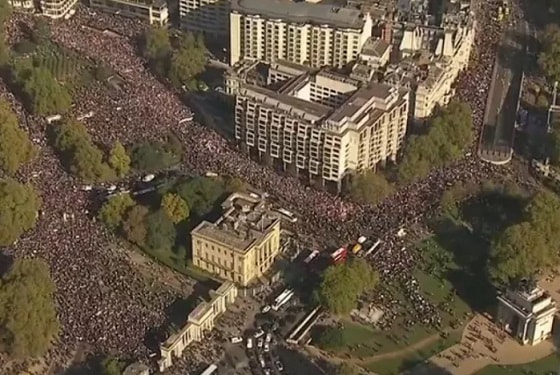 People's Vote March for the Future, London, 20 October 2018
150 other local groups hired coaches too. This is why we went:

“As an NHS worker I went on the march as I’m incredibly worried about the negative impact Brexit will have not only on the NHS but the country as a whole. Since the referendum it’s become clear that the leave campaign was based on lies and deliberately misled the public. There will be no £350 million a week for the NHS. Instead the reality is more staffing gaps, concerns about medicine provision and likely more cuts. In a poll this month, 64% of doctors and nurses thought the NHS will get worse after Brexit.

“I don’t think this is what people voted for, and a people’s vote is the only way to give the public a say on the reality of Brexit now we know so much more. It’s great to see so much momentum building for this. It’s a real opportunity to stop us entering a deal (or worse leaving with no deal) that will have such devastating consequences for so many.”

"As a doctor in the NHS I'm really concerned with how the NHS will cope if we leave Europe. I went on the march because people didn't know the true facts when they voted in the referendum.  We didn't know that Brexit could cost us over £50 billion just to settle the divorce bill. We didn't know vast numbers of staff were going to leave the NHS to return to other parts of Europe. And we were told there would be an additional £350 million a week for the NHS if we left, which even Nigel Farage has admitted was a mistake.

"The truth is we will be worse off and, more importantly, so will our children. Let the people decide the peoples' future now we know what we are voting for."

"There is a Chinese curse that says may you live in interesting times, but these aren't interesting, they are destabilising and destructive.  While we are all distracted by the concept of Brexit an environmental catastrophe is unfolding which we should be working with our European partners to resolve.

"I also believe if Brexit happens we will see the break up of the United Kingdom over the next 10 years which is not something I thought I would see in my lifetime.  There is no Brexit Happy Ever After - this is a disaster."

“I’ve not been involved in anything political before, but watching Brexit unfold made me feel I had to do something, because what’s happening seems to be nothing like what was promised to voters before the referendum, and it could seriously damage the country. It always seemed to me there should be a second vote on the details of the Brexit deal, to make sure the country is happy with what the government has negotiated. So that’s why I marched.”

“I marched because we’ve been sold down the river by career politicians who said whatever they thought the public wanted to hear. The referendum was almost fact-free, so the public need a vote on the final deal, not the mirage sold two years ago. Poll after poll is now showing a majority of people support this, but our MP Luke Hall is still in denial. So please ask him to support a People’s Vote.” 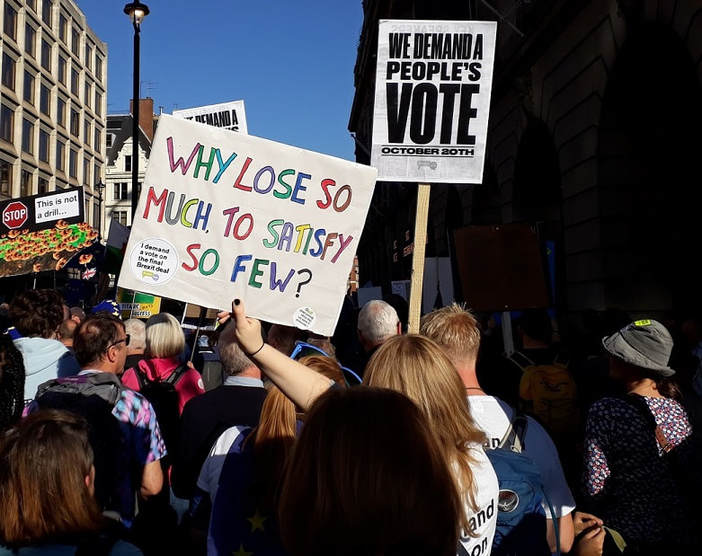 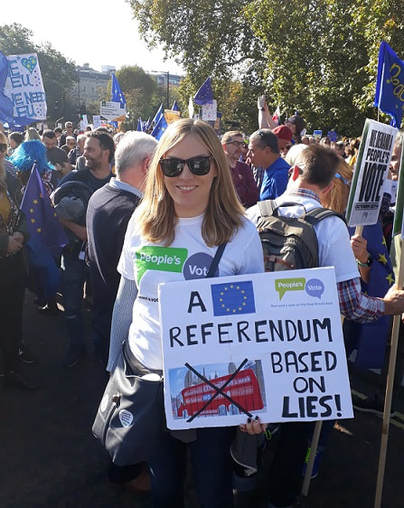 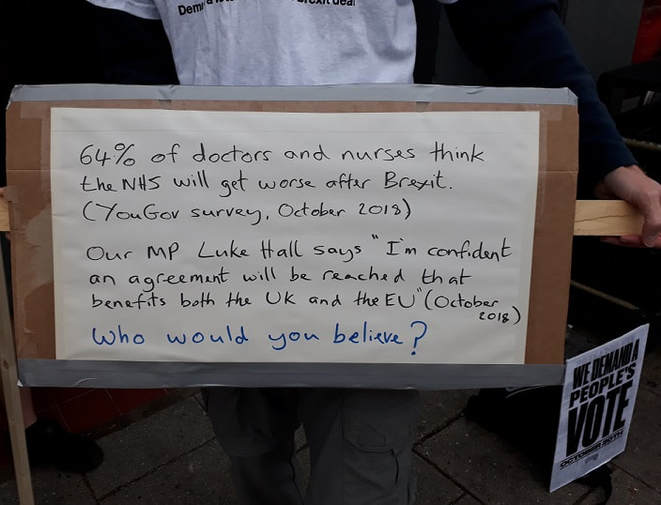 Thornbury and Yate residents at People's Vote march in London on 20 October 2018
​
​The march was led by thousands of young people whose voices have often been ignored on Brexit. People of all ages were there, and at the finish in Parliament Square there were speeches from young people, doctors, business leaders and MPs from the Conservatives, Labour, Liberal Democrats, Greens and SNP.